Detecting instantly stocks that have exhibited such moves in the past is something Sismo offers by combining visual display of excess kurtosis and skewness. 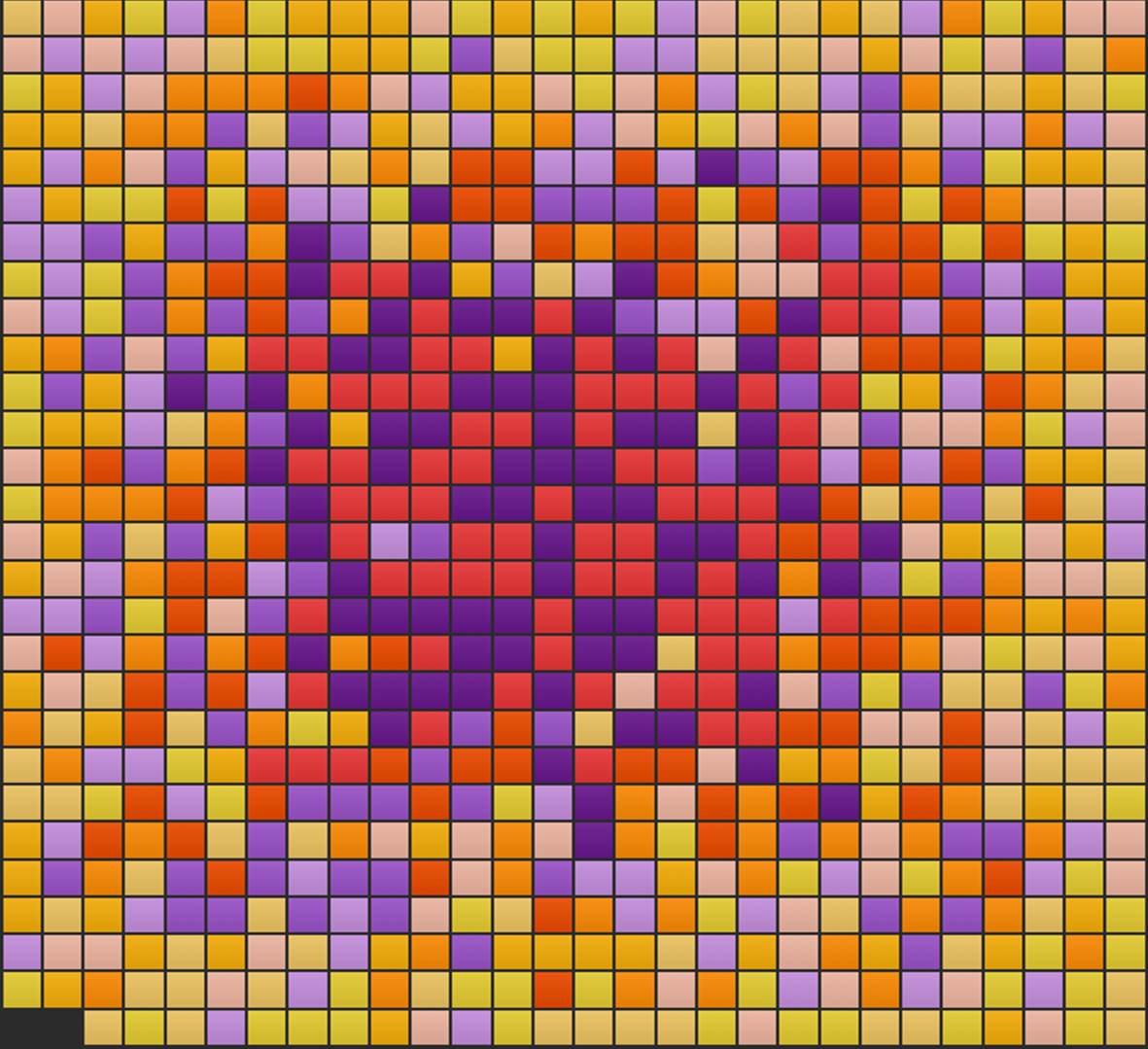 The picture above is a Sismo visualization of the European equity market at 7 March 2016 with 780 stocks, including all Stoxx Europe 600 constituents, each represented by a tile. The positioning rule reflects daily excess kurtosis over the last 6 months: the closer you get to the center of the chart, the higher you rank in excess kurtosis (from -0.33 in the periphery reflecting almost normal distribution of returns to nearly 100 in the center, i.e. typical fat tail distributions).

Purple-color indicates negative skewness and orange positive skewness. Yellow stocks are somewhere near average, with no significant skew, neither positive nor negative. So all high kurtosis stocks (in the center) are either dark purple (sharp downward move) or dark orange (steep upward move). There is no way to fall on neutral ground while exhibiting highly unusual stock move: it’s either up or down…

Let’s illustrate this by zooming inside the central area, down to British company Pearson, with extreme Kurtosis (56.8) and negative skewness (-6.48). 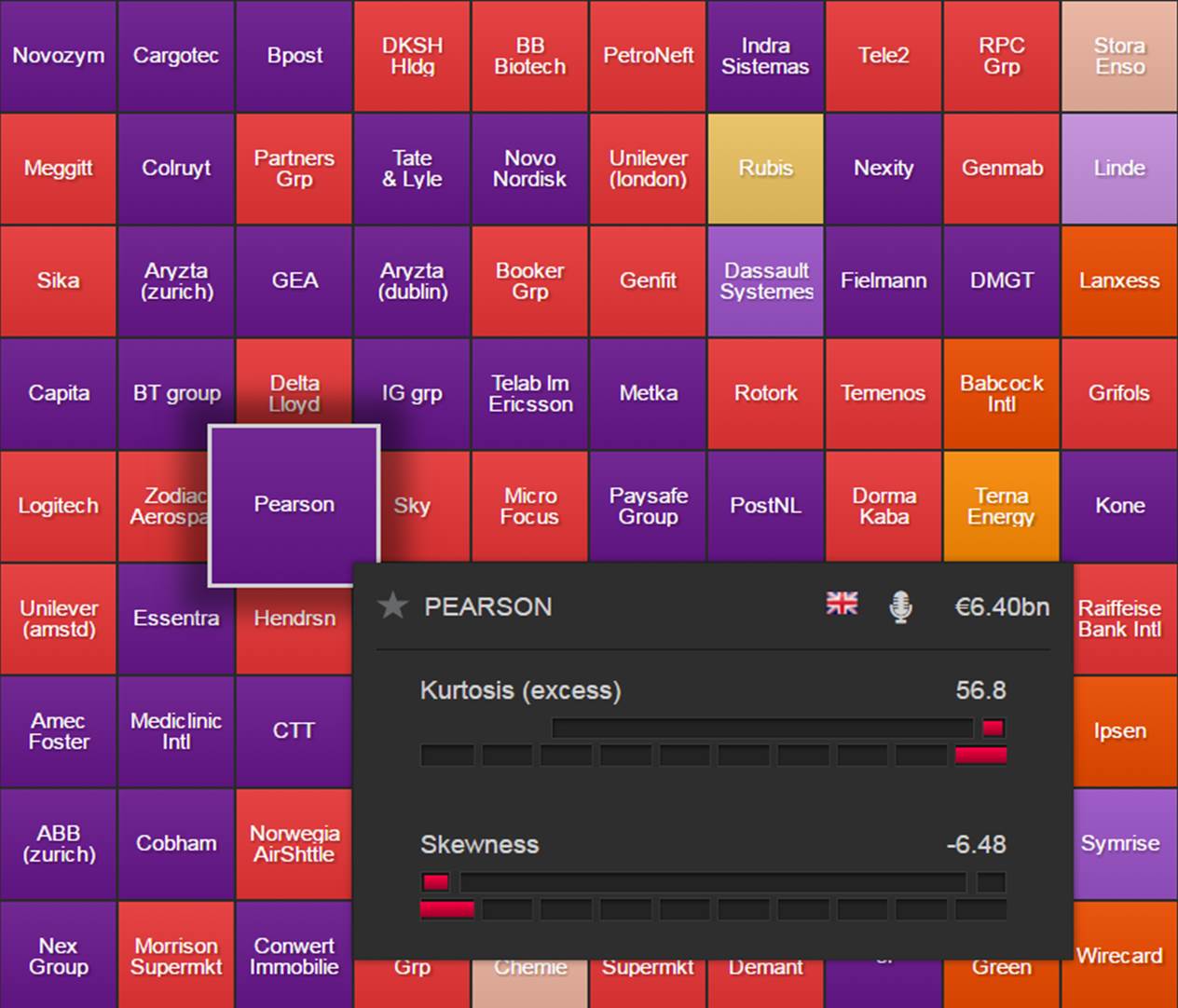 The company has been in the middle of a transition from publishing powerhouse to educational specialist for a long time now. It has issued five profit warnings in the past four years, starting in October 2013. The fifth one happened on 18 January and the stock plunged 27%. 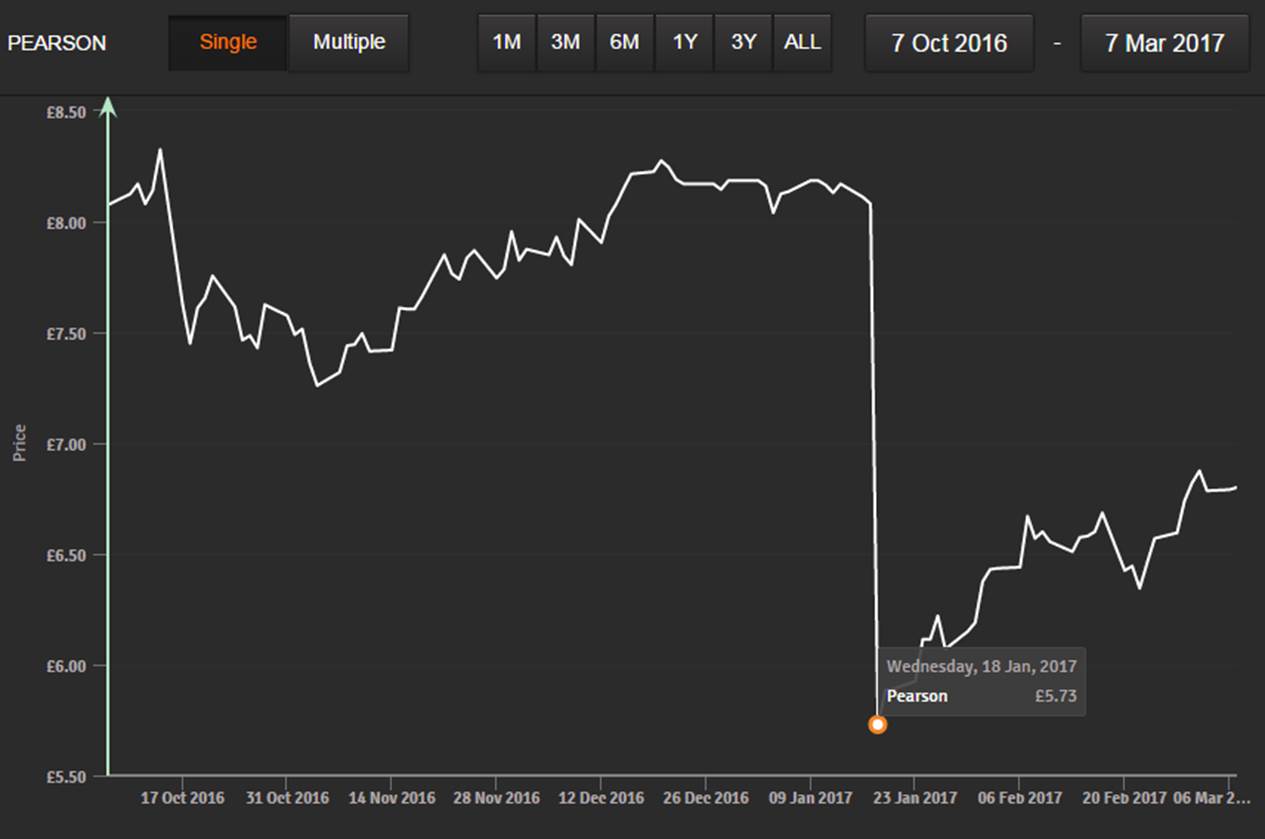 To the right of Pearson on our kurtosis tiling stands Sky, another British media stock with similarly high kurtosis but strong positive skewness (the tile is dark orange). 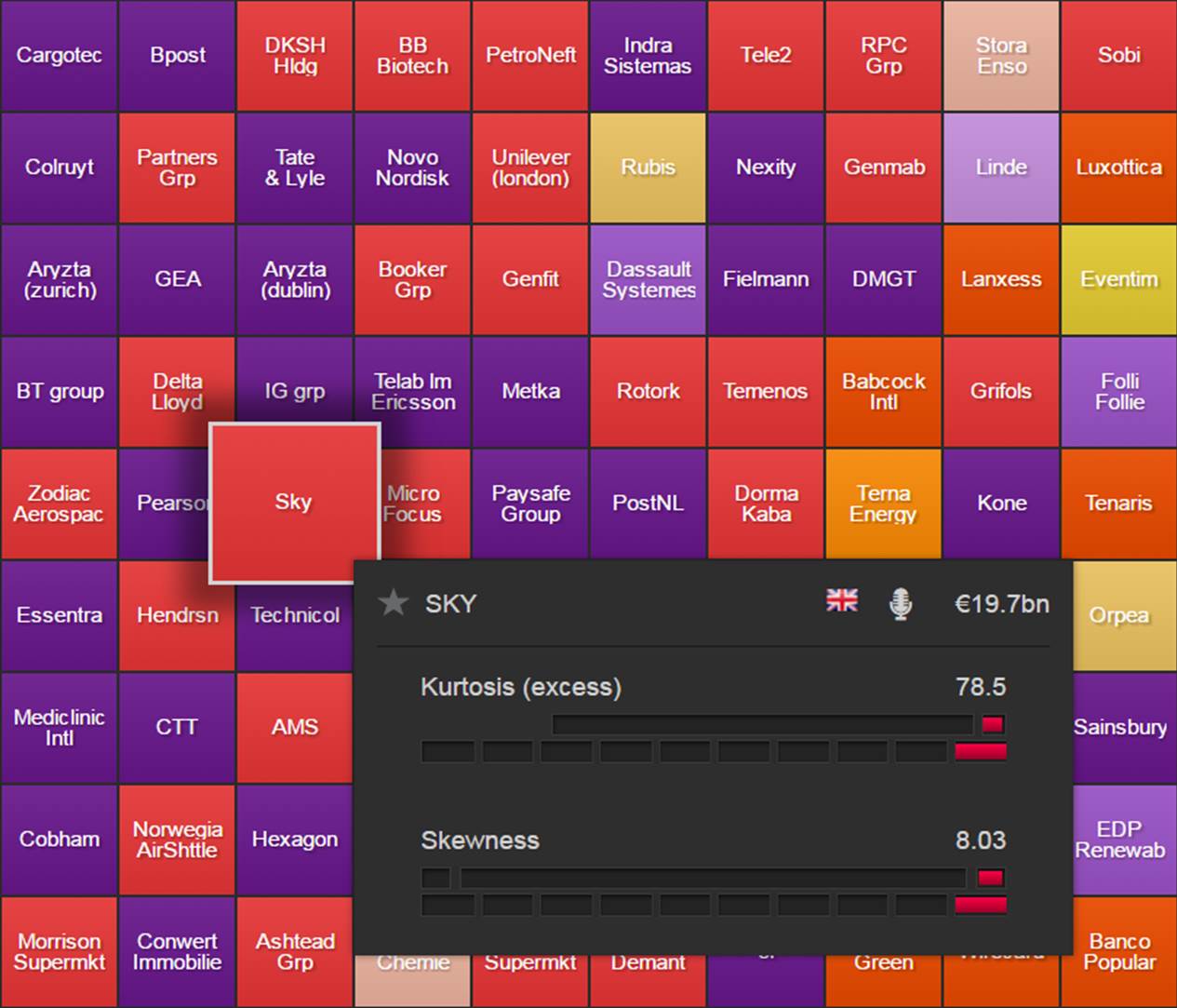 Sky is the opposite situation of Pearson’s. On 9 December 2016, 21st Century Fox™ announced a takeover bid for Sky on and the stock closed up 26.7% on that day. 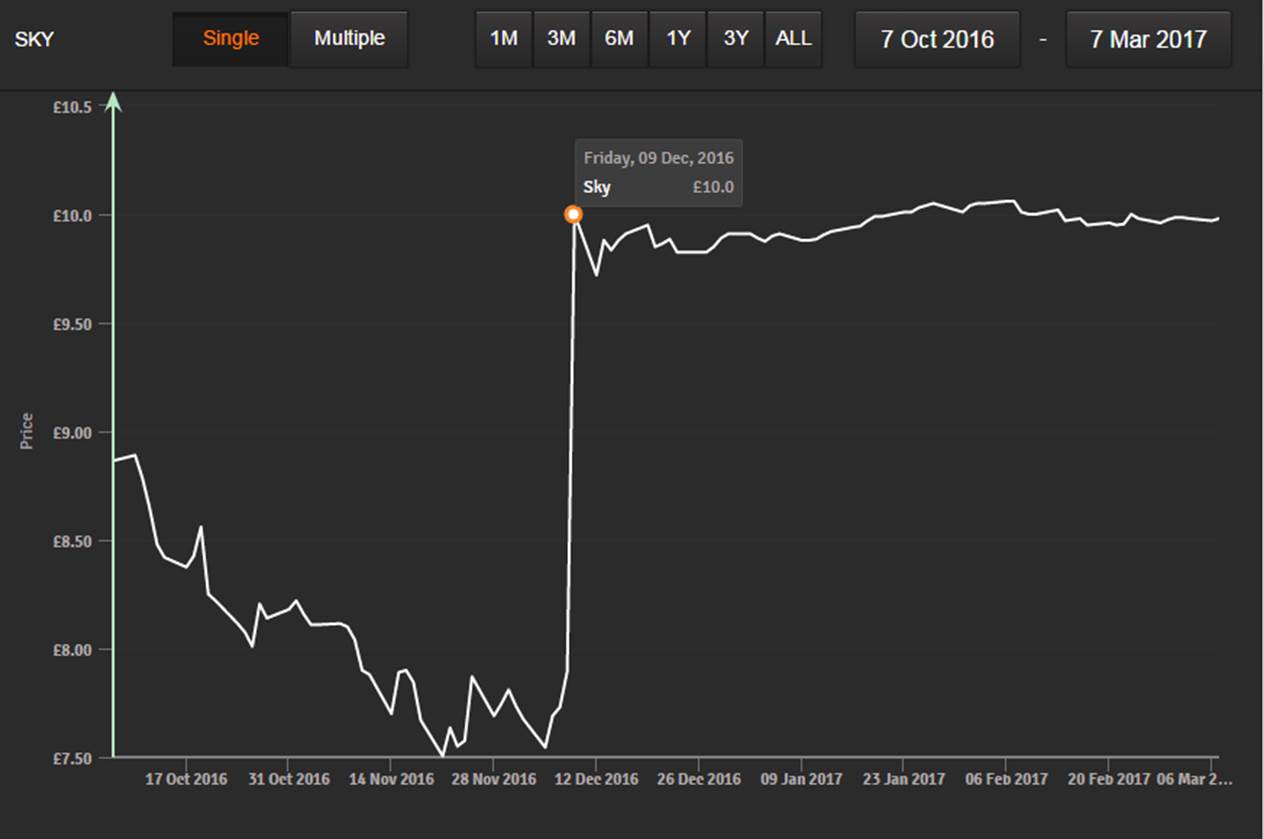 Kurtosis is a powerful tool but you may wonder if we need to get to the fourth moment of return distribution to detect outliers… Could a more a classic volatility do the trick? Are volatile stocks high kurtosis stocks and vice versa?

To check this one, we switched the color indicator on the kurtosis tiling from skewness to volatility (daily over last 6 months), with a green to red color gradient from low vol to high vol. The correlation is obvious with a strong reddish coloring of the central part where high kurtosis stocks are. But there are exceptions, such as Hermes, with high kurtosis but moderate volatility. 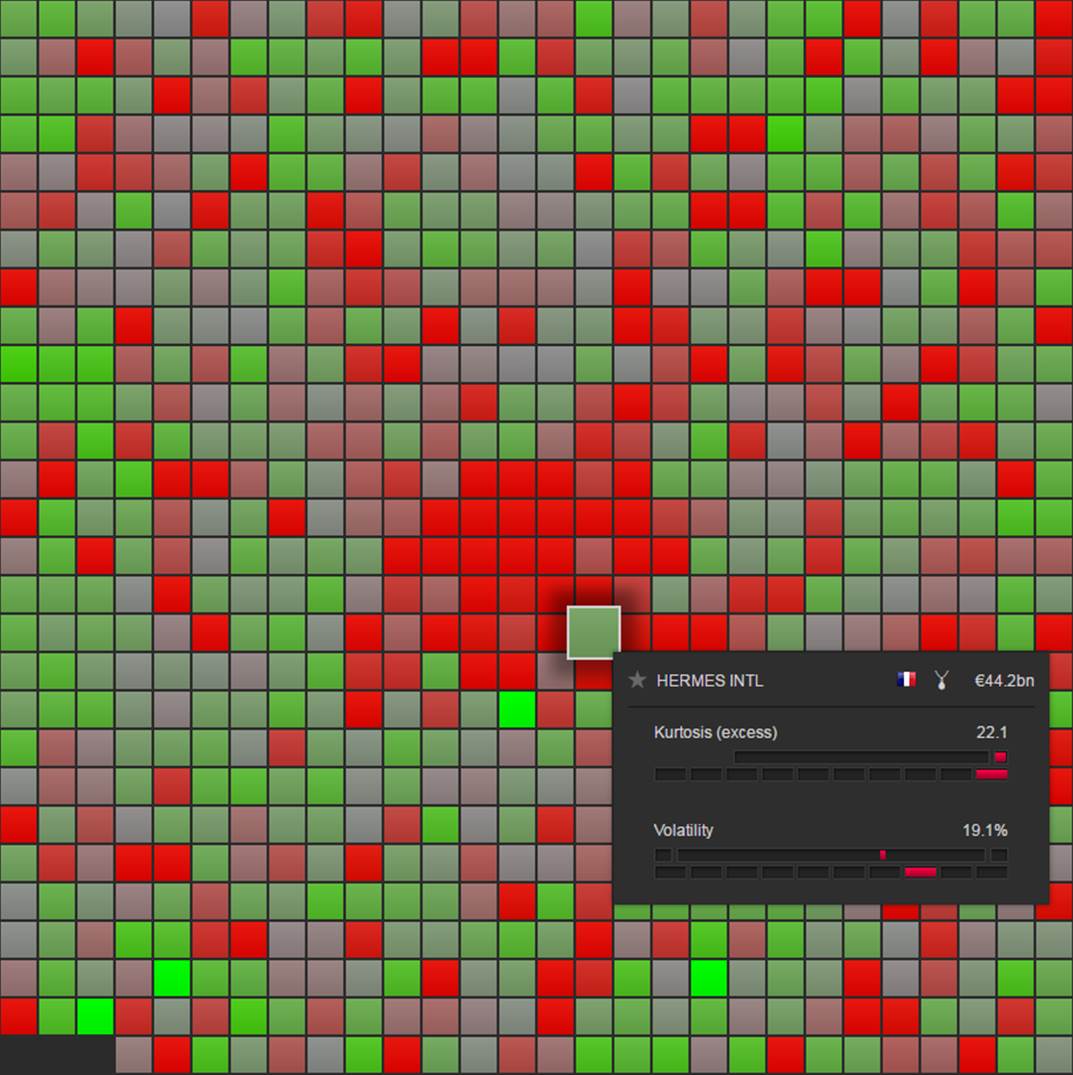 Hermes high kurtosis dates back to 14 September 2016, when the stock dropped by 9% after the company announced it would no more provide analysts with growth guidance on sales. The stock has steadily resumed its low vol-regular upward path since then (with no guidance…). 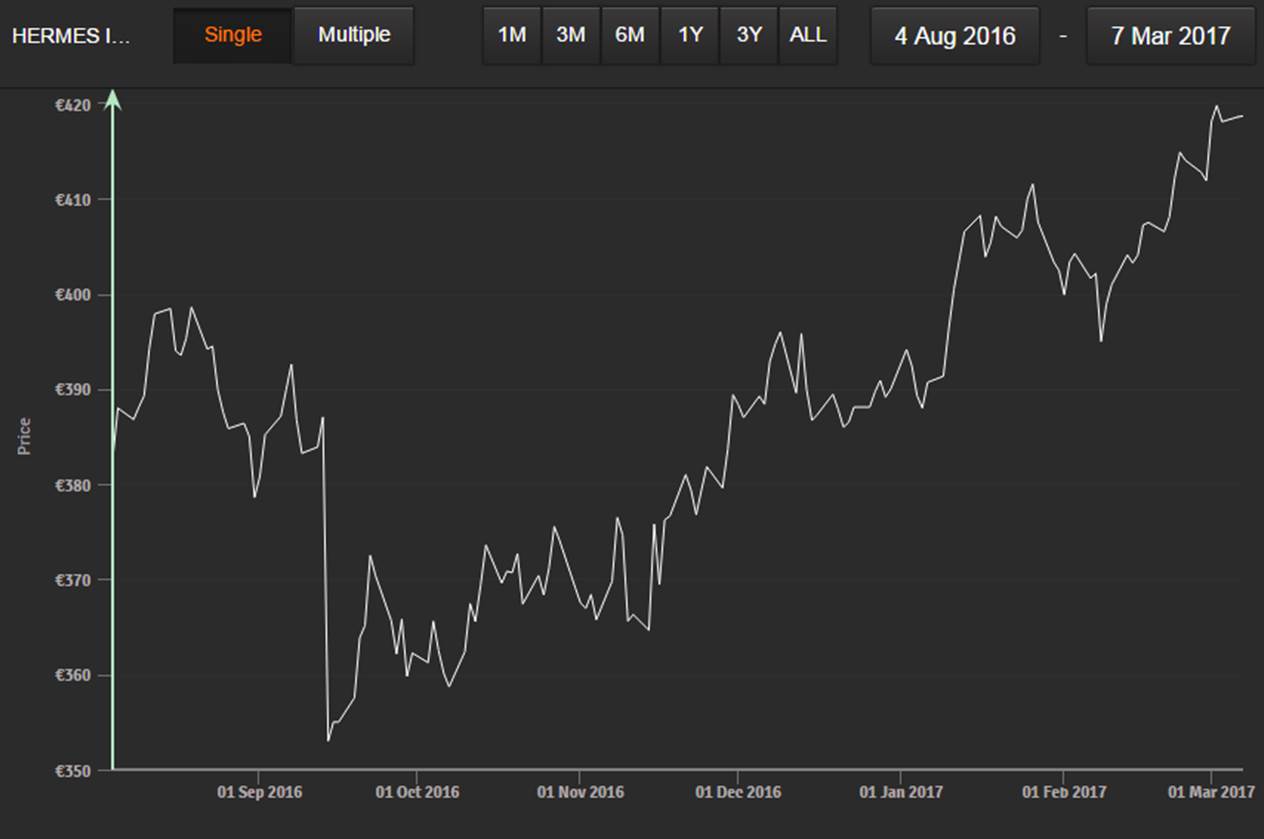 Let’s conclude: volatility is in no manner encompassing the whole kurtosis–skewness information signal.

For defining investment strategies, this signal may not be relevant since it can’t be predictive (kurtosis surges when something big has happened to the stock either way, so it’s too late for the investors…) but for tracking purposes, to instantly check out of a large population of stocks which ones exhibited abnormal moves, it’s a highly powerful tool.